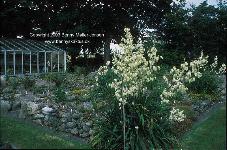 Where did I get the plant from:
I got the plant in 1987 from Maylands staudergartneri in Denmark (this plant was actually the first hardy Yucca I bought, who could have foreseen what this could lead to?!).

Short description of the plant:
Plant: acaulescent with several large rosettes, forming new rosettes from long rhizomes up to 30 cm long, the plant becomes quite big in just 10 years. Leaves: gray green, floppy, 70 cm long, 3,5 to 4 cm wide around the middle, with some thin fibers at the margin of the leaves. Inflorescence: pubescent, 125 to 180 cm high, paniculate with many long branches up to 20 cm long held in almost right angle!. Scape: 70 to 100 cm starting just between or slightly above the leaves. Flowers: pendulous (bell shaped), white, small 7-8 cm across. Fruit: slightly purplish dark green, rough surface, slightly constricted, 23- 27 mm thick and 50-58 mm long, variously and irregularly flattened in places, as if saved off with a knife.
Seeds: not know at the time of writing! 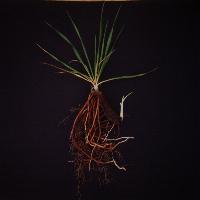 Hardiness:
This plant is a very hardy form, but the soft leafs do not like too much wind. I have only seen severer damage of this one after a very wet winter, and if I have removed the rosettes that has flowered in the fall instead of in the spring! The reason to this is that the old rosettes protect the new rosettes in the first winter, and now I always remove the old rosettes in the spring, and since then I haven't had any dead rosettes of this form.

Where do I grow the plant:
I grow it in many places in the garden, and even in part shade it will grow and bloom, but for more flowers it should be planted in a sonny position.

In the summer of 2003, I tried to pollinate the flowers with pollen from the following Yuccas:

I also used the pollen from this plant to pollinate the following:

More details of the Yucca hybrids made in 2003.