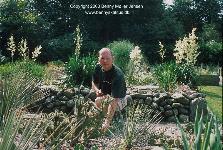 Benny in of one of the many big cactus beds,
The photo is taken in the summer of 2003. 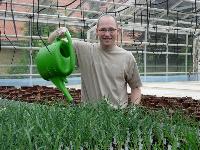 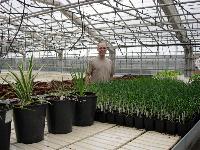 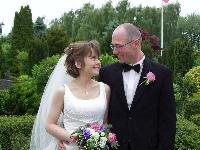 
Profession: I'm educated as bookbinder (1985), and I did work as a foreman/supporter/instructor at the same place for 20 years. I started working at this place in 1977, 12 years old in every holiday and after school every day: In 2008 I stopped due to health problems (3 degenerated lumbar discs), but all my adult life and most of my youth did I work at this bookbindery, except for a year, when I went to a boarding school (Horne Ungdomsskole). And just after I got my education, were I lived two years in the City Århus, were I also worked as a bookbinder. I hope now that I have had spine operation (two new titanium discs, in Feb. 2009), that I can start on new kind of work or even another education, maybe in tourism or something about plants?

Where do I live and garden: My house, which I bought in August 1991, is situated about 15 km from the shore of the North sea, a few kilometers south of the City of Hjørring (Hjørring's web site). The property, where I'm are gardening, is 2600 square meter, of this around 125 square meters is cactus beds, not counting all the paths in between them, just the beds!

My Cactus, Yucca and bamboo hobby: I have been collecting hardy cactus since I was 10 or 12 years old, I got my interest in cactus and other plants from my mother whom also inherited the gardening interest from her mother and her grand mother. The Yucca interest started when I got the house with the big garden in 1991, and has evolved since, so I know have one of the largest collection of plants from this Genus. I am also one of a few which is making new forms of Yuccas by hand pollination, and I have made more than 40 different and all new crosses (read more about hand pollinating Yucca).
My interest in bamboo started in 1999, were I did get the first 3-4 plants from a cactus friend in England, since then the collection has grown to about 50 different forms of bamboo from 25 cm in height to 4,5 meter (so far maybe they get bigger in 2009?).

Other hobbies: Alpine plants, Hiking, Wildlife, Bird watching, Collecting mushrooms for eating, Cooking (Hot chili), Beer (always interested in tasting new beers), Computing, and photography (in the spring of 2001, I got a new Camera; Pentax MZ-5, and a super film scanner; NIKON coolscan III. In April 2004 I bought my first digital camera a Nikon D70 (many of the early pictures on this website were  taken with a Richo KR10 from 1980!). All Elena's photos are taken with a NIKON Coolpix 4200, or a NIKON S600.. 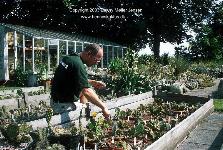 Benny in a typical situation..... weeding the potted Opuntia plants.
The photo is taken in July 2003.