Natural occurring Yucca hybrids:
"Wild" Yuccas interbreeds with cultivated Yucca:
Man made Yucca hybrids:
How to pollinate Yucca flowers by hand:
Some of the hybrids that I grow here in Northern Denmark:
Hybrids from gardens, not man made:
List of man made Yuccas in the late 20th. Century and in the early  21st. Century:
Variegated Yuccas.:
List of Yucca hybrids in the "Jensen collection" 2009 (new page) 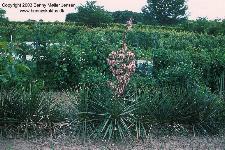 I suspect that most any species of Yucca can hybridize with one another, as long as the flowers are open at the same time (or, if one saves the pollen). The exceptions would seem to be Yucca brevifolia and Yucca whipplei, of which there never has been any records of hybrids.

According to David J. Ferguson is some species of Yucca self sterile and others are self fertile. He have gotten good fruit when self pollinating Yucca pallida, Yucca rupicola, Yucca thompsoniana and Yucca aloifolia.  He has not been able to get fruits on anything related to the Yucca glauca complex (Yucca glauca, Yucca elata and kind), when they were tried to be self pollinated!.

This is however not always accurate, and I had also for many years thought, that some of my plants were totally sterile, and tried pollinating those every time they bloomed, and always without any success.
But in the summer of 2010, I made an experiment with two forms which I never have had any success with, not even with pollen from another Yucca. The experiment was, that I only pollinated flowers at the very end of a side-branch or in the very top of the inflorescence. In both cases it worked with pollen from another Yucca and later experiments, some years later, showed, that it even worked with pollen from the plants it self.
This experiment shows, that the flowers of Yuccas has apical dominance, which is very important to know, specially if there are only very little pollen available of a rare pollen-donor. Now I almost only pollinate flowers in favorable positions, which made the success rate of the pollinations rise considerably.

Yucca plants interbreed in nature, and during the last 15 years or so, there have been located many new locations in which there are found possible wild hybrids.

I have knowledge about the following hybrids all found in the natural habitat:

According to WEBBER many of the populations of Yuccas are intermediates between the so called "species" of Yucca in the glauca/elata and the rupicola/rostrata groups. If you count these, then perhaps half of all Yucca plants are "hybrids"!?

Yucca recurvifolia is probably Yucca aloifolia [or gloriosa] X Yucca flaccida, but this needs to be proven.

WEBBER, 1953; Yuccas of the Southwest
Agriculture Monograph No. 17, U.S. Department of Agriculture, USA.

This is another kind of hybrids. 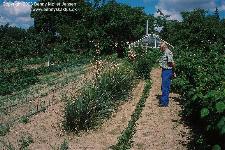 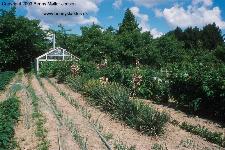 A hybrid which contain either Yucca linearifolia, Yucca treculeana or Yucca rostrata as the parent plants had occurred in a nursery in Spain, where they collected seeds which were from open pollination in the nursery. In Spain there are also Yucca aloifolia in many places, so this species might also be a possible parent, to be taken in consideration.

Yucca rupicola x ? (maybe treculeana, torreyi, faxoniana, or maybe rigida?). Seeds harvested at a landscape nursery in New Mexico in 2002 or 2003. A few plants is in cultivation in the private collection of Tim Behan.

The first to make a Yucca hybrid were the German nursery-man Graebener, in 1899 did he make Yucca x karlsruhensis, and a "sport" of this were named Yucca 'Graebeneri'.

The person whom has made most the hybrids were Carl Sprenger. In the years from 1897 to 1907 Carl Sprenger named at least 122 Yucca hybrids! Carl Sprenger's work was continued by Willy Müller.

But I don't have any reference on Müller's work, so if any of the readers knows anything please let me know!

Another person were J. B. Deleuil from?, he should had create more than 3000 plants, and some of them were named:

I'm searching for information about F. N. Rusanov a Professor from the Botanical Institute and Botanical Garden in Tashkent, Republic of Uzbekistan. Until now I have the following:

There may be a few more which I have not noticed in the first quick reading thru.  We are still working on the translation (114 pages + 5 other pages from an article about Yucca hybrids). When I know more you will be informed.

Rusanov writes that the hybrids from 1. generation, most often looks like the seed parent. I can not see this in my own hybrids, it depends of the genes of both parents, as I have made the hybrid Yucca filamentosa x glauca, with two different pollen donors, and the outcome is very different. We need to make a lot more than one or two crossings, to get the picture of which genes are the strongest and most dominant, but hopefully can we get a hint on what to expect, as we get more different crossings made worldwide.

You can find information about the hybrids made from 1945 to present day by clicking here.

If you have any information about Yucca hybrids please let me know.

If you are a Yucca breeder, please name your new cultivar according to the International Society for Horticultural Science (ISHS)

Please note following text which is from ISHS's web page about "how to name a new cultivar": "Since 1959, new cultivar epithets must be in a language other than Latin and they must be unique within the so-called denomination class which is usually the genus."

I had tried pollinating Yucca's for many years, but until july 2003 I did not have any luck with that. But in the summer of 2003, my friend Pia Larsen, did find a technique that worked, since our first success, I have made cross pollination of the several species and forms:

Fruits on Yucca glauca (BMJ #1461) Note that one of the fruits are deform, as if it didn't receive enough pollinium!!
Photo from August 18th 2003.
Copyright ©2003 Benny Moeller Jensen

Hybrids from gardens, not man made:

How to pollinate Yucca flowers by hand:

To get seed pods you  need two different clones of Yucca as they are self sterile! It looks like that we got the best pollination during the time from 19 to 22 in the evening, but then again many of the flowers were pollinated during the morning and in the afternoon, so it's not impossible to pollinate all day long! According to Sprenger it is possible to collect pollen from an early blooming species and save it  in an air tight container for a couple of months and, so it's is possible to pollinate it with an late blooming species! I have not tried it yet, but will collect pollen and try so store it in my freezer for next summer!?!?

List of things you need when you cross pollinate Yuccas:

Small bamboo stick, 5 cm long and less than 1 mm thick. Or use the "stem" of a short grass flower, which is thin enough for this kind of work.
1 black lid from a film canister.
Alcohol to clean stick and lid with.
Paper towel for the alcohol.
3M medical tape (US only)
Labels with a hole.
Bast (raffia) for tying labels to the flower.
Pencil for writing on the labels.
A steady hand + good luck!

How is it done?

The tricky part is to gently collect the pollinium from the anthers, in each flower there are 6 anthers with two polliniums on each (some plants have four!), not all of the pollinium is ripe at the same time, so if you want to pollinate, during the evening and the early morning, you would have to look several times, to be sure the pollen is ready. I collect the pollen with a short (5 cm long) and very thin (less than 1 mm thick) bamboo stick, and collect it in a black lid from a film canister (black makes it easier to see the pollinium). Before starting to collect from a new plant, you need to clean your stick with alcohol, so you don't mix any genes, and don't know who the parents are! It's important to start with collecting pollinium from all the parents you want to pollinate, as the pollinium sits very loose on the anthers, and you will easily shake of the pollinium when you begin to pollinate! When you have collected all the pollinium you need, from those plants you want to try with, you can start pollinating. It's not difficult to pollinate, just pick a pollinium with the thin stick, and gently put in into the stigma of the flower of the "motherplant" with out damaging it (This is the reason why you need a very thin stick) (in USA it might be advisable to but a small piece of  3M medical tape on the stigma, so your local Yucca moth don't pollinate the flower too!). It seems like that freshly opened flowers, are better to pollinate that flowers that are a few days old. Then write a label with the number (all my plants are numbered) and the name of the parents, always with the seed parent first and the pollen parent last. The label is then tied to the pollinated flower with a piece of bast (raffia). In 4-10 days you will know if you have succeeded or failed to pollinate, if failed the flower falls of, and if you have success the fruit slowly starts to point upwards and get a purple tinge. The seeds should be ripe in 6 to 12 weeks, and all you need to do, is to sow the seeds and you might have small seedling of a new your own hybrid next year. Stem less Yuccas normally bloom after 5 to 10 years from seeds, I don't know how many years it takes for those with stems, as none of my plants have ever bloomed!


Some of the hybrids that I grow here in Northern Denmark: